The Secret Life of Fish: The Astonishing Truth about our Aquatic Cousins 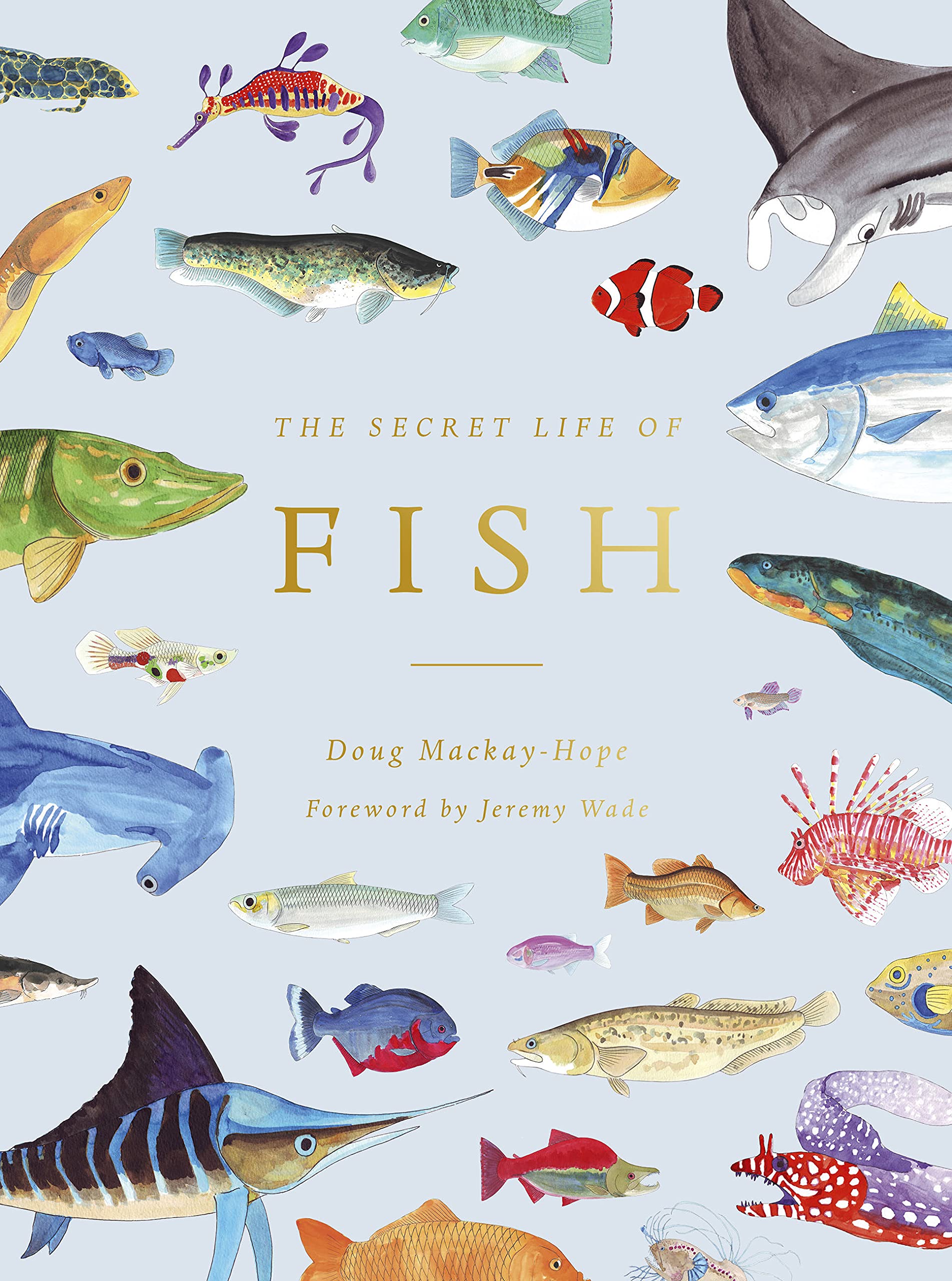 Discover the astonishing truth about our aquatic cousins: how they think and what they know, their experiences and unique behaviours, and the many things we have in common.

There are 33,000 species of fish on our planet, and that number is constantly increasing. In context, that is more than all the species of mammals, birds, amphibians and reptiles added together, making fish the most numerous vertebrates on our planet. Waters worldwide are teeming with these elusive creatures, but how much do we really know about them?

Grouped into thematic chapters – including the Dangerous and Deadly,Unusual Giants and Mini Marvels – in this comprehensive book biologist Doug Mackay-Hope profiles the secret lives of 50 of our most interesting underwater cousins in an insightful and myth-busting study, complete with charming watercolour diagrams and expert insights.

Learn about the White-Spotted Pufferfish, whose spines hide a deadly toxin, or the Ocellate River Stingray, who lurks in the rivers of South America and who can kill with just one touch of it's barbed stinger. Meet Bargibant's Pygmy Seahorse, who measures just 2cm in length, as well as the enourmous Whale Shark, which grows to around 13m in length. Be fascinated by the wierd creatures of the deep ocean, such as the Peter's Elephantnosed Fish or the kaleidescopic Picasso's Triggerfish.

With a foreword by Jeremy Wade, presenter of River Monsters and Mighty Rivers, and official fish aficionado, this book is a complete compendium of fascinating fish facts, with maps showing where in the globe they can be found, plus facts on how they live, hunt and escape predators.

Beautiful illustrations and photographs accompany each entry, as well as interesting facts on how they evolved to adapt tochanging environments, making this book the perfect guide to all things aquatic.

The Secret Life of Fish

There are more than 33,600 species of fish on this planet, which are grouped into approximately 515 families by taxonomists.

This book will introduce you to fifty distinctive fish species, each with its own remarkable story. Some you might be familiar with, but others might be completely new to you – however, they all represent just how important, amazing and intriguing fish can be.

The secrets of how their bodies work will be revealed – from their super-senses to their deadly toxins and their ability to give electric shocks. I will show you their strange and often baffling behaviours – explaining how and why they act as they do – and explore the history of how we came to discover their secrets. We’ll see just how important a role they play in our lives and the world as a whole.

Grouped into thematic chapters – including

There are only a handful of creatures able to live in the hottest habitat on Earth – and one of them happens to be a fish. Death Valley, Nevada, USA – only 209 km (130 miles) from Las Vegas – has the honour of holding the record of the highest temperature ever recorded. On 10 July 1913, a temperature of 56.7°C (134°F) was logged in the aptly named Furnace Creek. This is the lowest place on the North American continent, well below sea level and almost rain-free, due to its position between mountain ranges – an unlikely place to find a fish.

Pupfish are so-called because they have the delightful reputation of being quite playful – like puppies, although this seemingly adorable behaviour is the males fighting rather than playing.

It’s a small location for a full species to develop, for sure: only a few metres wide, with an average water temperature of 92°C (198°F), almost boiling, and a depth of 500 m (1,640 ft), although no one has plumbed the bottom. There is only a tiny rock ledge under the water where algae can grow, and the sun only gets to it for a few minutes a day – just enough for it to photosynthesize.

A.K.A. So good, they named it once

HABITAT A cave in Death Valley

SPECIAL SKILLS Survival against the odds

It’s impossible to know how many pet goldfish there are in the world but these fish are undoubtedly the most recognizable for most people in the northern hemisphere, at least. From fairgrounds to ornamental ponds, these orange-coloured pocket jewels are one of the most popular aquarium fish – but their story began in China more than 1,000 years ago.

The goldfish remains popular today and, as with most other domestic animals and pets, we have begun to properly mess with its genetic nature. The modern goldfish is one of the original genetically modified creatures. Goldfish are selectively bred for their shapes, characters and even colours.

Forget what you know

While it is true that living in an actual goldfish bowl might well have driven the fish mad by making them constantly swim in circles, when it comes to memory, the opposite is true. The goldfish has rather a good memory. They can be trained to recognize faces and are generally much smarter than anyone considered, being able to remember tricks.

DISTINGUISHING FEATURES All shapes and colours

There are no reviews yet.

Be the first to review “The Secret Life of Fish: The Astonishing Truth about our Aquatic Cousins” Cancel reply

Added to wishlistRemoved from wishlist 0
Add to compare

Added to wishlistRemoved from wishlist 0
Add to compare
$21.99

The Secret Life of Fish: The Astonishing Truth about our Aquatic Cousins

Animalpetdogs participates in the Amazon Services LLC Associates Program, which is an affiliate advertising program designed to provide a means for websites to earn advertising fees by advertising and linking to amazon.com

Affiliate Disclosure: As an Amazon Associate, we may earn commissions from qualifying purchases from Amazon.com. You can learn more about our editorial and affiliate policy .